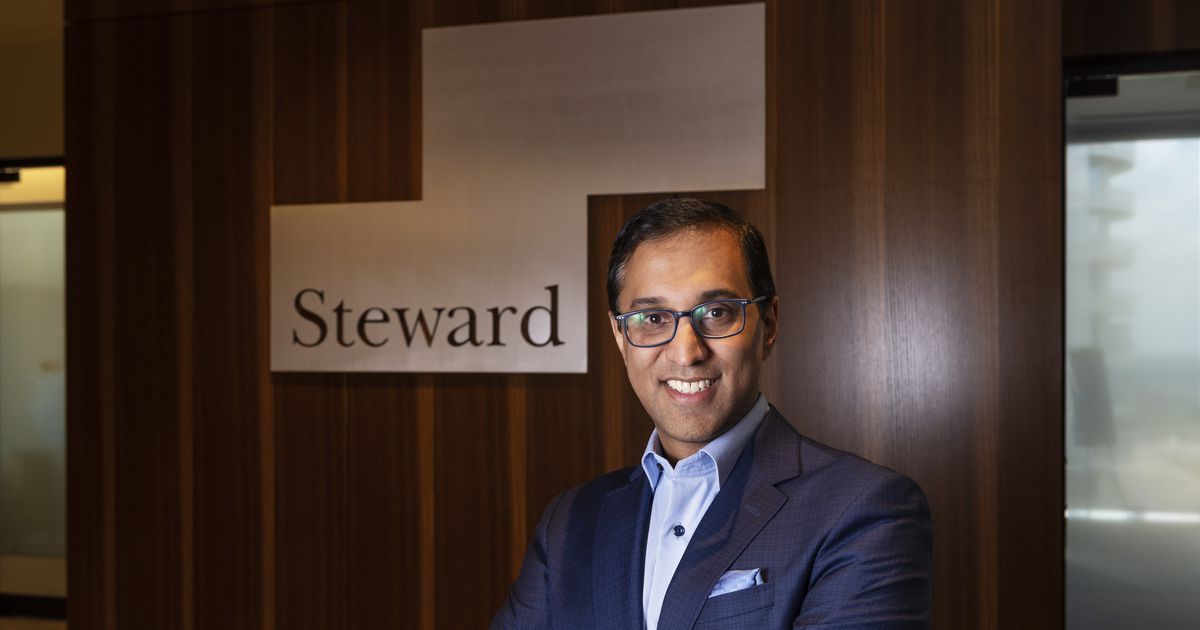 Steward Health Care made the move to Dallas three years ago, without the typical fanfare that accompanies a multibillion-dollar corporation’s relocation.

The hospital and surgical center operator’s roots are a collection of struggling Catholic nonprofit hospitals in the Boston area that a private equity firm bought a decade ago before cashing out at an $800 million profit. It was under private equity ownership when Steward acquired a group of community hospitals scattered across Texas.

Now under physician ownership, Steward is ready to grow in the Lone Star State.

Its closest hospital to Dallas is 180 miles east in Texarkana. That’s where Steward is making a $227 million investment in 66-year-old Wadley Regional Medical Center.

The company’s move to Dallas was intended to create more of a “national mindset,” said Dr. Sanjay Shetty, Steward’s recently appointed president of North American operations. The company has 730 employees at its headquarters in Uptown and in a Richardson facility.

It was company executives’ first extensive interview since establishing Dallas as the headquarters.

Steward wants to more broadly become “part of the fabric of the state,” Shetty said. “We’re very much a part of Texas.”

According to Steward, its network in Texas treats around 300,000 patients annually.

In June, it struck a $1.1 billion deal with Farmers Branch-based Tenet Healthcare, one of the nation’s largest investor-owned hospital and surgical center operators, to acquire five Florida hospitals. It marked Steward’s first acquisition since becoming physician-owned.

Steward was created by New York private equity firm Cerberus Capital Management in 2010 when the investment company bought Caritas Christi Health Care, the second-largest hospital group in Massachusetts at the time. Earlier this year, Cerberus cashed out its stake in the company for a reported $800 million profit.

Cerberus set up its exit a year ago by transferring ownership of Steward to a group of the company’s own doctors led by Dr. Ralph de la Torre, who is Steward’s chairman and CEO.

Steward now runs 34 hospitals in nine states, five in Malta and Colombia, and a large network of doctors’ offices. The company reported $5.4 billion in revenue in 2020.

Its physician-owned business model is controversial in the health care industry.

Britt Berrett, a professor and director of the Center for Healthcare Leadership and Management at the University of Texas at Dallas, said that controversy actually goes back to the origin of hospitals before and after the industrial revolution. Before, hospitals were almost always run by religious organizations. Eventually, people began to flock to those institutions over smaller, less technologically advanced physician-owned hospitals.

“It wasn’t until the economics became very, very attractive that physicians returned to looking at physician-owned hospitals,” Berrett said.

“Physicians who had economic interest started directing their patients that were paying to their hospitals, and those that weren’t paying to the charitable nonprofit hospitals,” Berrett said.

When the Affordable Care Act was passed in 2010, the federal government put a moratorium on opening physician-owned hospitals. A 2016 study by the journal Health Affairs examined 106 Texas hospitals to determine whether hospitals modified operations to increase profitability with the new ACA restrictions.

Several hospitals rushed to open under the physician-owned model before ACA was implemented, the study found. Nine physician-owned hospitals opened in Texas between 2011 and 2013, and none accepted Medicare. There wasn’t any evidence that existing hospitals stopped accepting Medicare, according to the study.

“We’re able to make investments that are going to pay off through improved health and wellness, and improve the outcomes over the median and long run,” Shetty said.

Though Steward began its expansion outside the U.S. before its transfer to physician ownership, Shetty’s new position as president of Steward North America marks an increase in that focus to build Steward up internationally. It also allowed de la Torre to take on additional duties as executive chairman of Steward International.

Before becoming the first to take on the newly created role, Shetty had been working at the company for 11 years. He previously led the company’s South Region and oversaw operations in Texas, Florida, Arkansas and Louisiana.

Shetty’s medical specialty is radiology. He earned a degree in biochemical sciences and a medical doctorate from Harvard, and a master’s in business administration from the Wharton School at the University of Pennsylvania. Shetty said he still practices medicine occasionally.

Steward, like all health care organizations, underwent major changes during the COVID-19 pandemic and continues to take measures to ensure that it’s prepared for new outbreaks or problems. Shetty said the company put $400 million into its facilities to meet COVID demand and buy equipment and PPE for its 42,000 employees.

In June, The Wall Street Journal reported that Steward lost more than $400 million in 2020 and reported nearly $1 billion in unpaid supplier expenses and other bills. It also said Steward received more than $700 million last year through a series of complex deals with a real estate investor that helps private equity firms cash in on their investments.

“It was an incredibly difficult year for our employees,” Shetty said. “I would recognize them over and over again. They are really, truly heroes. It’s not a cliché.”

Steward has not required staff to get COVID-19 shots, but Shetty said complete vaccination is the company’s “clear goal and expectation.”

This year, Steward is applying what it learned about the pandemic’s peaks and valleys to be prepared for any resurgence in cases, but it also wants to continue providing other forms of care.

“I worry that a lot of care was neglected when people were so focused on just COVID,” Shetty said.

Note: This article was updated on Aug. 4 with corrected information about Shetty’s MBA and the company’s most recent financial disclosures.