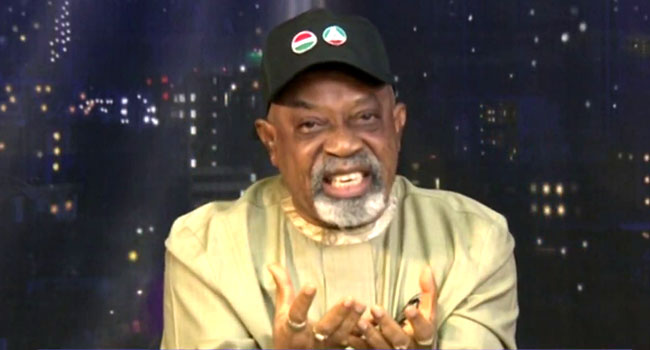 The Minister of Labour and Employment, Dr Chris Ngige, has rated medical treatment in Nigeria as “fairly okay”.

Although he is not outrightly against seeking medical attention abroad, the minister believes it is not out of place for Nigerians to stay back and get treated in the country.

“What are you going abroad to do, the expertise is here (in Nigeria),” the minister said on Friday in an interview with Channels Television.

He had featured as a guest on Politics Today where he announced that the Federal Government would enforce the ‘No Work, No Pay’ policy for resident doctors who have been on strike since Monday.

“Plenty of billions has gone into health. For me, if you have the means and you want to do a second opinion abroad, why not? It is permitted.

“I have my daughter (and son) here, I deal with them. Not that any time I want to do medical check-up abroad I don’t do that, I do that.”

Over the years, many Nigerians – including the President and other top public office holders – seek medical attention abroad.

While many have condemned the practice, others asked the authorities to invest in the health sector and upgrade the nation’s medical facilities to world standard to discourage medical trips abroad.

Comparing the level Nigeria has attained in the field of medical science to other countries, Ngige admitted that the nation still lacked some advancements.

According to him, the Federal Government has performed its functions well to have the health sector on the concurrent list.

The minister thinks the government deserves to be commended considering the nation’s political situation and others.

“On an average note, medical treatment here is fairly okay as far as I am concerned,” said Ngige who is also a medical doctor.

“I use the National Hospital (in Abuja), my card is there; I use the State House clinic for my eyes; I use another private hospital here.”

Members of the National Association of Resident Doctors (NARD) went on an indefinite strike over irregularities in the payment of salaries to house officers, among other issues.

They also accused the government of failing to fulfill its promise to members of the association who died of COVID-19 in the line of duty.

The industrial action, which entered its fifth day on Friday, has crippled activities and left patients stranded in many government-owned hospitals in the country.

It commenced a week after President Muhammadu Buhari left Nigeria for the United Kingdom where he participated in the Global Education Summit on Financing Global Partnership for Education (GPE) 2021-2025.

Although the summit had ended, the Presidency said the Nigerian leader would remain in London for an earlier scheduled medical check-up.

He is expected back in the country by the second week of August.