Even if an investor’s planning to hold onto their shares for many years, it helps to start an investment off on the right foot. Seeing early stock price gains can help to cement confidence in a pick, which can give them the conviction that’s needed to hold onto it during future downturns.

So, today I’ll be discussing a pair of healthcare stocks that have enough gas in the tank to make impressive gains in 2022. Both are heavily reliant on COVID-19 vaccine revenue at the moment, but neither is content to be a one-trick pony.

Pfizer (NYSE:PFE) has (at least) two major revenue drivers that could power its share price higher: Its coronavirus vaccine, Comirnaty, and its new antiviral treatment for COVID-19, Paxlovid. That’s on top of the myriad number of other moneymakers in its massive portfolio of drugs, of course.

Investors are probably familiar with Comirnaty, which produced an estimated $36 billion in revenue for the company last year, per management. Comirnaty is responsible for a sizable portion of its trailing revenue of $69.3 billion, and it’s doubtlessly why the pharma’s quarterly sales have grown by 134.4% as of Q3 in 2021.

So long as people need protection from the coronavirus, Comirnaty will continue to be a cash cow for Pfizer. And, given that new variants may require variant-specific jabs, Pfizer is likely to experience strong demand for updated vaccines and booster doses.

At present, the company expects to ship more than a billion doses to low- and middle-income countries in 2022 alone, and produce 4 billion doses total. Right now, that’s expected to bring in another $31 billion in revenue through the year.

Pfizer also plans to invest more in the mRNA technology behind Comirnaty to build out its pipeline of vaccines and therapeutics. Establishing itself as a leader in the space — which it shares with mRNA maestro Moderna, and with BioNTech (NASDAQ:BNTX), its Comirnaty partner– will help to power the company’s long-term growth.

But this will also be the year of Paxlovid. The antiviral drug already has received Emergency Use Authorization in the U.S., and Washington has ordered 20 million doses. Demand is already skyrocketing, and more orders are sure to come. Analysts at SVB Leerink estimate that sales of Paxlovid could top $24 billion in sales this year. A mere few months ago, Pfizer said it was planning to manufacture 50 million doses in total this year; now, it’s aiming for upwards of 120 million doses.

If that’s not a harbinger of a bull run, not much could be. Plus, Pfizer’s valuation is priced to perfection. Its price to earnings (PE) ratio is a low 15.3, which is significantly lower than the pharmaceutical industry’s average, which is near 22. 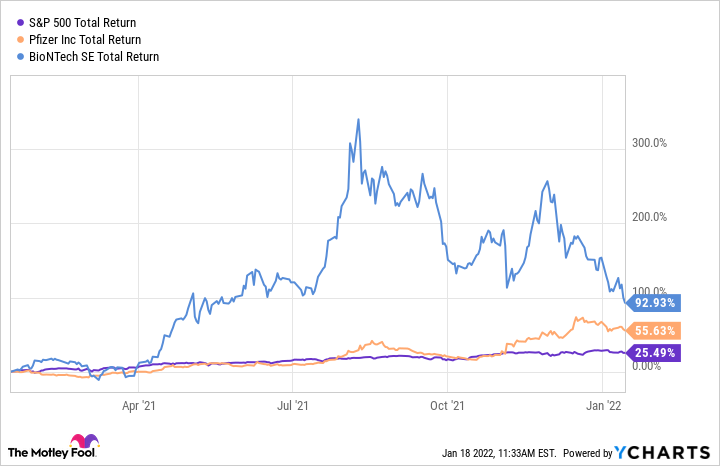 As a smaller biotech working in partnership with a giant like Pfizer, BioNTech often gets overshadowed among the vaccine stocks. But every dose of Comirnaty sold benefits the company, which means that it’s gearing up for a big year too. So far, sales of Comirnaty have powered BioNTech’s trailing revenue of $13.8 billion and its blisteringly fast quarterly revenue growth of 8,918.2%.

Further, it’s making the most of its share of the profits, funneling them into its research efforts. Throughout 2021, it increased the size of its research and development team by more than 40%. That’s likely to pay off handsomely down the line in the form of new projects and growth opportunities.

More immediately, BioNTech is entering into a new collaboration with Pfizer to develop an mRNA vaccine for shingles. This additional team-up increases BioNTech’s already-formidable credentials as a vaccine development collaborator, and also gives it access to Pfizer’s considerable regulatory and global commercialization resources.

Including the new shingles candidate, BioNTech expects to initiate four phase 1 clinical trials in 2022. It already has five oncology trials in phase 2; positive data updates from those could certainly buoy its share price.

While there’s no guarantee that those upcoming drug trial data readouts will be positive, shareholders can rest assured that BioNTech’s Comirnaty revenue isn’t going away any time soon, which reduces the risk that bad news could derail the stock in 2022.

But, that doesn’t mean BioNTech’s stock has been a winner for everyone. In the last month, the company’s shares have dropped by nearly 32%. Part of that has been caused by a pullback among other vaccine stocks and volatility in the market at large. Still, I’m of the opinion that it now trades at a significant discount.

Much like Pfizer, its PE ratio of 7.4 is quite low in comparison to the biopharma industry’s average. And, as the future of the company is starting to take shape with new pipeline projects, I’m confident that things will improve with time.

This article represents the opinion of the writer, who may disagree with the “official” recommendation position of a Motley Fool premium advisory service. We’re motley! Questioning an investing thesis — even one of our own — helps us all think critically about investing and make decisions that help us become smarter, happier, and richer.